GC Lecturer publishes a WWII book with a difference 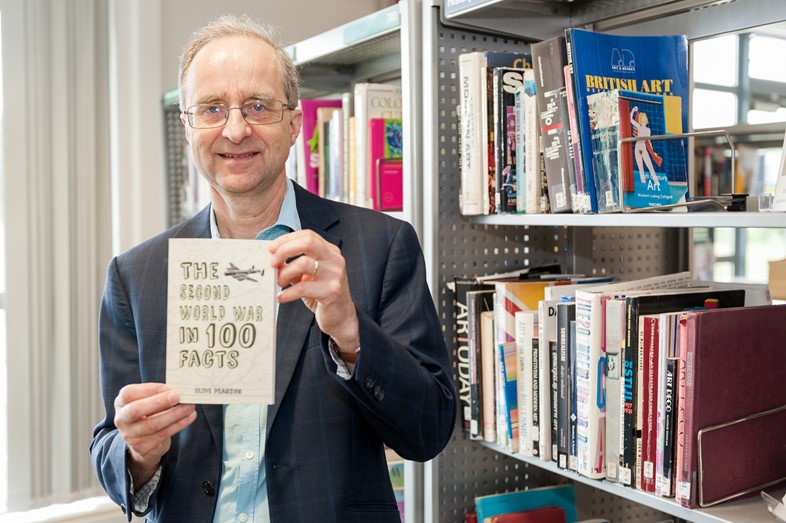 GC History Lecturer and World War Two buff, Clive Pearson is celebrating the publication of his first book ‘The Second World War in 100 Facts’, which sold an impressive 566 copies on its first day!

The book tells the story of the war using interesting and sometimes quirky facts, making it a lighter read, making it an ideal introduction to what can be a heavy subject.

What inspired you to write the book and use the 100 facts format?

I have taught ‘Britain at War 1939-45’ both at A Level and to students on the Access to Higher Education course at GC. This inspired me to write a book around the subject and I approached the Amberley publishing with the idea. They suggested I include the whole war and develop my ideas into something that fitted into their ‘100 Facts’ series.

Is this your first published piece?

Sort of. I did write an article about Stalin for a national magazine ‘History Review’ some years ago, but this is my first book.

How long did it take you to write?

The book took about nine months. I had to be very disciplined and do at least two facts a week and more in holiday time if possible.

Where did you find all the facts?

I have quite a library of books at home on the topic and some of it I had already assembled for my previous manuscript idea. I must admit to finding bits and pieces of useful information on the internet too.

Do you intend to write any others? Perhaps in a similar style on another historical event?

Yes, I have suggested ‘British Prime Ministers in 100 Facts’.

Will you use the book in your teaching?

Well, it is not really a book for the classroom. It is an introduction to the subject. It takes you through the important events but with some humorous stuff in between.

Can you tell us one of your favourite facts from the book?

I like the one about a young reindeer being taken onto a British submarine after a visit to northern Russia in winter time. The Russian port commander gave the deer as a gift thinking the British crew were returning directly to the UK. In fact the submarine spent several months patrolling the high seas. When finally the submarine did return to England the deer had grown somewhat and they could only get her out by firstly trussing her up and then pushing and pulling with the help of a winch and a broom. The book goes into the amusing difficulties the crew and captain encountered during their tour of duty.

Where can we buy a copy?

Either through Amazon or Amberley Publishing … or any High Street bookshop.

Finally, what makes the book stand out?

On the one hand it is informative and serious but on the other there are the quirky elements alongside. I hope that readers will chuckle as they read their way through it.

Clive will be signing copies of ‘The Second World War in 100 Facts’ at the Imperial War Museum in London on 15th July, from 11am to 1pm and 2pm to 4pm.

Congratulations to Sydney Davies for passing her Level 2 Hair Professional Apprenticeship with Ashley Paul Hairdressing in Gloucester. Sydney started her apprenticeship with Gloucestershire College in September 2017 and was ready to complete her End Point Assessment when lockdown suddenly started, forcing the salon to temporarily close. On return to the salon in July, Sydney worked incredibly hard to get ready for her assessment in September, which she successful passed - even whilst wearing full PPE on one of the hottest days of the year! Find out more here.

Apprenticeship Minister to launch West of England Institute of Technology

Gillian Keegan, Minister for Apprenticeships and Skills, will be ‘virtually’ opening the West of England Institute of Technology (WEIoT) today. Find out more here.

Whether your business can offer 1, 5, or 20+ places, get involved and help support the next generation right here in Gloucestershire. Find out more here.

Gloucestershire College becomes one of the first to be awarded CyberFirst Schools status by the National Cyber Security Centre (NCSC) – a part of GCHQ – through a new initiative which recognises excellence in cyber and cyber security education. Find out more here.