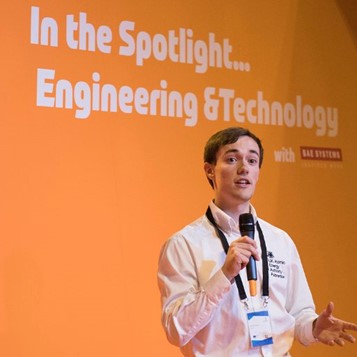 A Gloucestershire College student proved he's a young man of many talents, when he stepped up on stage to co-host the 2016 National Apprenticeship Awards.

David Godden is completing a BEnd (Hons) Degree in Electronic and Computer Engineering at Gloucestershire College on a part-time basis whilst completing a four-year apprenticeship at the Culham Centre for Fusion Energy (CCFE). He is a member of the Industry Apprentice Council and actively promotes engineering careers in primary schools as a member of the United Kingdom Atomic Energy Authority (UKAEA).

"Being co-host this evening is the icing on the cake for a brilliant year for me. I am passionate about apprenticeships, as they are hugely beneficial to employers, young people and the economy.

"I chose an apprenticeship because I wanted to learn on the job and gain valuable life experience. The opportunities that I have been given as an apprentice include giving a lecture at the Royal Institute...being part of a team which inspire school children every day to pursue a career in engineering, and most importantly working on a a multinational project to solve the world's energy crisis."

David is achieving his engineering degree while working, thanks to Gloucestershire College's partnership with The University of the West of England (UWE). Through this collaboration, the College is able to provide the opportunity for individuals from a wide range of backgrounds to achieve their full academic potential through Higher Education study in a local college environment. Successful completion of the course can allow progression onto several related BSc or BEng degrees at UWE.

David said: "I want to broaden my knowledge and experience in both electrical and electronic engineering, and increase my career skills in the areas of electronics and microprocessors, with the idea of moving towards a career in robotics.”

Alongside being selected to present the awards, David also achieved the impressive feat of leading a team of Culham apprentices to win the Brathay Apprentice Challenge in 2016. The three-month contest culminated in David's team travelling to the Brathay Trust's headquarters in Cumbria to complete a series of challenges again seven teams for the contest finals.

The apprentices took on tasks to prove their logistical, team-building and communications skills, including raft-building, sending semaphore signals from hills in the Lake District, high-wire and product assembly contests, and rowing races.

Of his team's win David said: "We hope that young people can use our journey as an inspiration for themselves. Hard work, determination and self-confidence are key in success.”

Congratulations to Sydney Davies for passing her Level 2 Hair Professional Apprenticeship with Ashley Paul Hairdressing in Gloucester. Sydney started her apprenticeship with Gloucestershire College in September 2017 and was ready to complete her End Point Assessment when lockdown suddenly started, forcing the salon to temporarily close. On return to the salon in July, Sydney worked incredibly hard to get ready for her assessment in September, which she successful passed - even whilst wearing full PPE on one of the hottest days of the year! Find out more here.

Apprenticeship Minister to launch West of England Institute of Technology

Gillian Keegan, Minister for Apprenticeships and Skills, will be ‘virtually’ opening the West of England Institute of Technology (WEIoT) today. Find out more here.

Whether your business can offer 1, 5, or 20+ places, get involved and help support the next generation right here in Gloucestershire. Find out more here.

Gloucestershire College becomes one of the first to be awarded CyberFirst Schools status by the National Cyber Security Centre (NCSC) – a part of GCHQ – through a new initiative which recognises excellence in cyber and cyber security education. Find out more here.